How To Create A Website Using Get African Business Online Tool 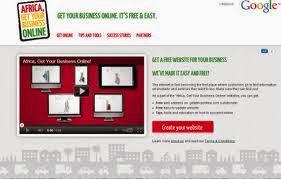 The getafricaonline tool is a platform where people who are on the business field who do not have a site can use this this plateform to create a business site regardless of the skill that one has,get african businessonline tool was design by google African team to support african business and promote their business in the whole world, in Ghana there are some great business that are running on this platform and are doing well in the Ghanaian market place some of this business are Auntie Muni Wakye

With this business site members are expected to use the tools to create business site that would enable them run their business offline and online.

Furthermore student can use this platform to create business site for themselves or parent.

Posted by techclub cuc at 02:32 No comments:

Jesse started the initial stages of the Lunch whiles Omane took center stage and told members about the class and how the class is going to be the weeks to come furthermore Omane started by explaining what the adclass is all about,he told them that the adcass is a class that is going to introduce them to various Google resources or tools such as Adwords,Admob,Analytics and so on which would enable as participate in the GOMC 2014,he also talked about his experience in this competition,he said during his time in the GOMC they did not have an Adclass as we are doing now,they has to research and do alot of try and errors in other to meet standards but in all they lived up the bidding by becaming regional champion.

Regional Champions was not on their minds according to him,he believed they could have been deserved winners of the competion but due to certain lapses and lack not being on their side lead them to be the regional champions.He talked about a lot of things concerning the competition and he made as aware that we should follow the rules of the game in other for as to be successful.

Moreover Omane said after they won the competition as regional champions they went to Nigeria to have an online Marketing Lab where they were trained by googlers to upgrade their skills in Online Marketing
When they were than with their training he and his team form their own company where they provid online marketing services to business and the name of their company is Cliq Africa
We were told by the GSA Alumini that after the lunch our next meeting we should be in groups.